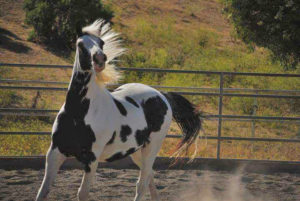 I wanted to share with you the experience I had with my beloved horse, Chasha, transitioning to life without a body. I began to talk to him telepathically about it at least a year before we made the decision because he was getting more and more lame. He told me at that time that he was ready anytime and had been visiting friends in spirit anyway.
I and Sue, the loving woman who took care of him at her ranch, decided on March 20 of this year for the date. The vet came out and lovingly took care of the injection. Immediately after I saw a faint outline of him to my right and felt him come up and “nose” my arm. It seemed he was asking if I was alright.
He was with me strongly that day, evening and all the next day. Feelings, images and awareness flooded in at lightening speed which is the way it is with spirit. I had always felt sad that I did not have the money to get a truck and trailer and take him on the camping trips and rides that he seemed to love, I was not able to take advantage of clinics and trainings that I thought would further our progress together, but I did give him a very happy home at a big ranch with lots of friends and beauty all around him. With all of this, I felt him sending me effusive thankfulness for “rescuing” him, giving him the love and care that he did not have being part of a big herd in South Dakota and just overall being very thankful for his life. The things I worried about were nothing to him.
Two friends helped me with talking to him when I wanted validation that he was ready to go (Mimi), and also after he transitioned, Kathy got a flood of messages from him and shared them with me. What she got was similar to what I got.
He also appeared to me to be a big, noble spirit, far wiser and aware than most people would give a horse credit for. I know many of you who have had beloved animal companions feel this way about some of yours. I realized all the gentle love and care that I gave him was always noticed and always deeply appreciated as well as greatly reciprocated, almost more than my heart can hold.
I felt him with me in my house and how delighted he was to be able to be here with me, seeing how I lived my human life, unencumbered by his big horse body.
He has showered me with immense love.
I woke up yesterday morning and saw him standing in his noble, handsome way, looking at me with gentleness as he always did when I was approaching the pasture to get him.
What I have received is a reminder that you never know who shares this planet with you whether human or non-human. I believe one of our greatest blocks is not realizing the great spiritual beings that live alongside us in the form of dogs, horses, cats, birds, etc. Not all of them are able to communicate as eloquently and clearly as Chasha (for example, my dog Sheila who some of you know, has not been this clear of a communicator).
Treat them with love and respect for you never really know who they are…..visiting angels.
Catherine Adams M.A.
litespirit.com
408-246-4385
408-218-8250 Mobile
Referrals are greatly appreciated!!